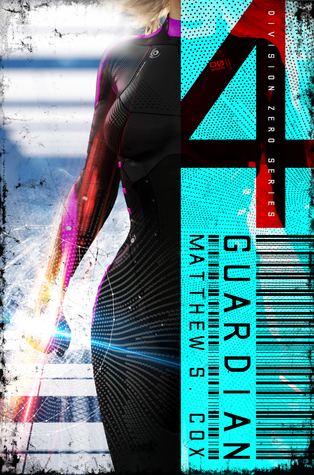 Cox fuses psionics and cyberpunk with a political thriller, producing a tale that is equally detective procedural and high-speed action.

This novel is the fourth in the Division Zero series. Proceeding past this point without reading previous volumes might induce precognitive dissonance (c.f. slang dictionary: spoilers).

Returning from a month’s recuperative leave, Agent Kirsten Wren moves straight from relaxed hours with her adopted son, Evan, to high stress days investigating possible spectral assault on an influential senator. As the same phenomena manifest around other people, she grows more certain a vengeful ghost is behind all the attacks; however, with the victims unconnected by geographical area, social strata, or any other criteria she can think of, she has no way to predict where the spirit will strike next or why it seeks to harm these people. And digging too deeply into a politician’s life in search of dirty secrets risks both her own happiness and what little acceptance psionics have.

Cox continues his skilled gestalt of psychic power and cyberpunk, expanding the world enough to avoid staleness without overburdening the narrative with new background. Where previous volumes introduced the economic, social, and metaphysical structures, this novel brings politics to the forefront. As such, while the threats of harm are of equal level, many stem not from criminal activity, magic, or other assailable target, but rather from immoral yet legal use of influence.

However, Cox doesn’t skimp on fast-paced action. In parallel with politicians who offer to grant or withdraw support and senior officers who choose to weigh immediate good against long-term consequences, spirits attack the innocent (and not so innocent) and fanatical preachers incite their followers to murder psionics.

Therefore, while this book doesn’t contain the same revelations of the morality and qualities of the afterlife that the previous volumes do, readers who enjoy Cox’s mix of gritty threat and more abstruse ethical dilemmas will not be disappointed.

As with previous novels in the series, Cox provides all the evidence that Kirsten discovers, allowing readers to form their own theories free from the irritation of only discovering the key fact after she has reached an unlikely yet true conclusion. And keeps monomania and idiocy to a minimum, avoiding situations where characters ignore a line of inquiry that seems obvious to the reader. However, he also makes full use of both close point-of-view and the uncertainties of psionic senses to keep the most likely conclusions shifting enough to maintain tension.

Kirsten remains a well-written character. Having successfully adopted Evan, she has a more settled quality; but also faces the greater obstacles of raising a growing boy over the long-term, both general and specific to psionics. She displays similar shifts between stability and uncertainty in her burgeoning relationship with Sam; she knows he cares, but still suffers visceral fear of commitment from having emotions forced on her by Konstantin. As such her struggle will be immediately recognisable to any psychopomp caught in a metaphysical struggle for a dystopian world – or indeed anyone with a job, home life, and less-than-perfect ex.

With the adoption resolved, Evan also develops, providing a youthful perspective on both the world and the training of psionics. Echoing the post-abuse behaviours and beliefs that Kirsten displayed in the first book, yet displaying different nuances, he seems a plausibly unique child without sacrificing the commonality that makes the reader immediately sympathetic.

The supporting cast are similarly both recognisable and complex. Even characters who only appear in a single scene are formed from the intersection of more than one trait, producing a sense of a world where people who, for example, hate the police are more divided by their differences than united by their common opponent.

Overall, I enjoyed this novel greatly. I recommend it to readers seeking science fiction that’s driven by character rather than world but that doesn’t skimp on the futuristic.