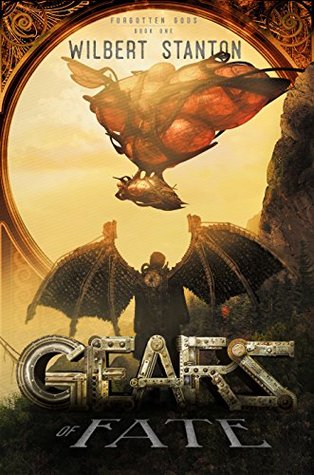 Fusing steampunk, fairy tales, and European myths, Stanton creates a new perspective on trope of a simple farmboy getting drawn into a quest to save a nation from an evil usurper.

Centuries ago, Queen Mob of the Fey conquered Earth, exiling humanity to Olympus, a city supported by arcane technologies. Zak Walker has grown up in the slums that have grown up around the original city. Making a paltry living patching up the machinery that supports the slums, he dreams of a better future than the berth on an airship that his father demands he take. When Seneca Rose, a girl who claims to be a princess of the Fey, breezes into his life, he thinks she’s mad. Until something kidnaps his sister, Alice. Rescuing his sister offers the meaningful life he craved, but when his dreams lose their lustre beneath the reality of an Earth ruled by Unseelie horrors, he is faced with a choice between returning to Olympus with Alice or helping Seneca.

This book turns on two fusions of existing ideas: first, the Celtic myths of the Sidhe, filtered through Shakespeare and Spenser, fused with the Greek and Norse pantheons to create a world where the Courts of Fairy have defeated the gods and now live out a life that mixes fantasy with Victorian nobility on the surface of Earth; second, the pipes and gears technology of steampunk fused with the ambrosia of the gods to create a world built of anti-gravity and clunky plumbing.

These intersections at the core of the world each have the potential to polarise readers: either the Sidhe defeating all the pantheons of Earth is a fresh take on the idea of all myths and religions being part of the same truth, or a reduction of several unique and complex mythologies to more generic fantasy beings; either using a magical substance in machines explains how they can do the unfeasible, or powering it all with magic is just sticking some gears on fantasy and calling it steampunk.

However, Stanton doesn’t make this story about the metaphysics and mechanisms of his world. There are questions of conflict between supernatural beings, but they occur within a narrative firmly centred on a young man’s attempts to rescue his sister and help his friend. As such, most readers will need to suspend little of their concern regarding blurring of lines to enjoy this book.

Zak is an engaging and sympathetic character. While the conflict with his father over his future is a common trope of young adult novels, this is very much not the teenage rebellion of an artistic protagonist rejecting the desire of a parent that they act like an adult; Zak already works hard, so is likely to retain the good graces of even the most diehard proponents of the theory that the young need to realise real life takes effort. This background of skilled manual labour and business dealings also makes Zak’s later resilience and adaptability in the face of a world shaped by the whims of Fey more plausible.

Seneca provides a good counterpoint to Zak’s normality. Casually adventurous where he is concerned with risk and desiring the grandiose rule of nations where he wishes to rescue a sibling, she laughs and dances her way through the quest, somewhere between manic pixie dream girl and eldritch force of nature constrained by the belief it’s a princess.

The supporting cast are equally a mix of solid humanity and arcane concepts wearing the shape of people. Youths dream of happy lives, but also display a lack of naivety consistent with a hard world. Supernatural beings act human enough to let the reader understand their motivations and powers without losing all their mystery.

Overall, I enjoyed this book. I recommend it to readers seeking steampunk at the fantastical end of the scale.

One thought on “Gears of Fate by Wilbert Stanton”