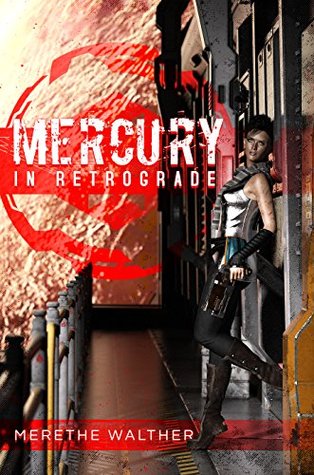 Focusing more on character than detailed nuances of technology, Walther creates a science-fiction tale with as much tension as a spy thriller.

Aralyn Solari used to be one of the best smugglers of her generation – until the authorities suddenly ended up one step ahead. After three years in the galaxy’s worst prison, all she wants is a quiet life; and a discreet courier job that will earn her enough to retire seems to offer it. However, the first person she meets on landing is Caden Madigan, her ex-partner and ex-boyfriend. Only, instead of a story about his time in prison, he’s got a badge, a uniform, and instructions to search her contraband; a search she only avoids because of an administrative error. He also has a warning that she’s in danger. With her contact missing and someone planting evidence that she’s involved in the slave trade, Aralyn agrees; but can she trust a man who apparently strolled away from charges that put her in a hole for years?

Unsurprisingly, this novel falls at the melodramatic end of the sci-fi spectrum. While the technology is advanced yet plausible, it is more background and McGuffin than central pillar of the story, with the majority of the plot being a swashbuckling conspiracy thriller.

Walther’s opening does an excellent job of setting up the air of uncertainty needed. With Caden not just having escaped punishment but become a respected officer of the law, it seems probable he is responsible for Aralyn getting arrested the first time; yet he seems almost pleased when she spots the procedural mistake he makes. With other officers present, she can’t probe him for the truth; and no sooner is she free of scrutiny than her easy courier job falls apart and she is on the run for crimes she didn’t commit.

This theme of running from one problem into a new one without time to rest continues throughout much of the book; even when Aralyn has uncovered enough to start acting rather than reacting, her schemes provide only temporary pauses in the stream of issues.

However, while this is the first volume in a series, Walther does close off a major arc at the end of the novel. As such, while readers might want more of the story, they will not feel cheated.

Aralyn is a well-written criminal with ethics. Her past exploits as a smuggler make her general competence at escaping danger and investigating why she is being set up plausible; and her relative youth adds a leavening thread of impulsiveness and inexperience in other areas that prevent her becoming too competent to be interesting. The only area that might not ring true with all readers is her lack of trauma: for a person who has spent three years in a supposedly horrific prison, she displays a surprisingly trusting and cheerful demeanour; however, this is not inconsistent with the action-movie tone of the novel.

Viewed solely from Aralyn’s viewpoint, the supporting cast display an engaging combination of apparent trustworthiness and hidden motives. However – unlike some thriller authors – Walther doesn’t focus on cutting readers’ feet from under them with constant twists. This is especially true with Caden, whose true allegiances and goals are revealed before the tension between Aralyn’s paranoia and reawakened interest becomes a distraction from the wider plot.

Overall, I enjoyed this novel greatly. I recommend it to readers looking for a fast-paced science-fiction thriller.

One thought on “Mercury in Retrograde by Merethe Walther”