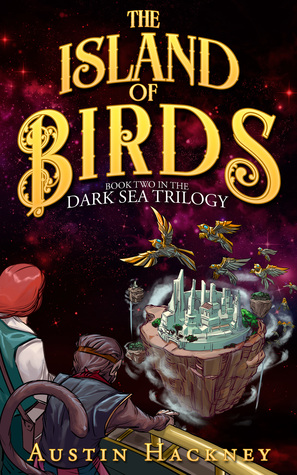 Combining a full-rendered alternate world of ether-sailing dirigibles, steam-tanks, and social inequality, with a style and language both accessible to older primary school children and engaging enough for adult readers, Hackney crafts a steampunk novel that is likely to retain depth on a subsequent reading.

This book is the second in the Dark Sea’s Trilogy. As such some spoilers for the previous volume might be present.

After many years under the guidance of a regent, Princess Annabel of the Island of Birds is almost of age. However, a dark conspiracy seeks to prevent her taking the throne of this apparent utopia. Meanwhile, Captain Harry and her crew, having followed a pirate’s map to the Island, are mistaken for enemy agents and shot down over the forests some distance from the capital. To survive Annabel and Harry must work together, but will a shared love of scientosophy be enough to overcome the chasm of experiences between a royal and a commoner?

Hackney opens the novel with a statement that the series should be read in order. Thus, while some matters of character and back story have less reprise than might occur in later volumes of many trilogies, readers are made fully aware in advance of the author’s assumption that they have read the previous book; and of the possible need to re-read if they do not recall the rough story. However, this does make this novel less suitable as an entry-point into the series, or the author’s work as a whole.

While both the oppression of a hidden class to support a utopia and the use of patriotic war to quell dissent play a part in the plot, Hackney for the most part utilises symbolism and implication rather than full description. This need for the reader to fill in the gaps from their own understanding results in much of the less pleasant aspects of the world and events being represented at a level appropriate to each reader’s existing exposure to such topics. However, a certain amount of peril and such is integral to the narrative, so those intending to provide young children with a copy might be advised to read the text first themselves to avoid discomfort.

As with the previous volume, the steampunk technology is a skilled balance of fresh ideas and familiarity, providing readers with novelty without sacrificing focus on character and plot.

As previously indicated, existing characters rely on the previous volume. However, Hackney does not leave them to rest on their laurels; both Harry and Sibelius demonstrate greater nuance of character.

Hackney employs a similarly efficient approach to creating the new characters, mixing easily identifiable tropes such as the corrupt adviser and naïve revolutionary with a carefully sprinkled layer of individuality.

Overall, I enjoyed this book but found it a touch short for my personal preference. I recommend it to readers seeking a steampunk tale suitable for all ages.