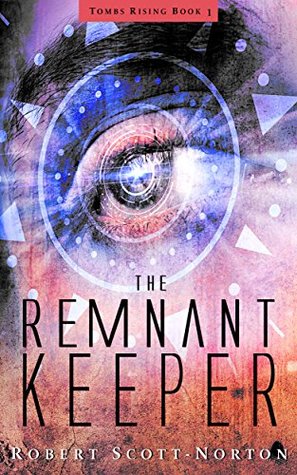 Mixing a surveillance society that doesn’t stop with death with character-driven thrills, Scott-Norton provides a tale that will please both thriller and science-fiction fans.

In the near future, telepaths are both the hated Other and a useful tool. And of all telepaths, the most extreme of both are the Remnant Keepers, telepaths trained to read the memories of the recently murdered. With a choice between this most reviled of professions or having parts of his brain burnt out, Jack Winston finds what comfort he can in helping send criminals to prison. Until his wife is murdered during the theft of the victim he is reading.

With one of the central plot points a modern spin on the idea of the eyes of the dead retaining the image of the last thing they saw, this is not a book for those troubled by eyeballs. However, Scott-Norton’s descriptions of this occur only when necessary for the plot, and are restrained when they do; as such, they provide the reader with a sense of Jack’s – and society’s – discomfort with the practice, rather than being an attempt to shock.

And this is only one part of both the plot and the world. Scott-Norton paints a very plausible picture of a society where a small proportion of the population develop telepathy at some point during their lives. Telepaths are marked on the face (for reasons that are not explained, but do not need to be). Corporations and government organisations are happy to use telepaths as tools; but not as equals. And some of those who might otherwise have blamed immigrants, feminists, or homosexuals for their problems, project their inadequacies onto telepaths.

Against this backdrop of social prejudice and corporate greed, Scott-Norton sets a classic thriller narrative: a man goes on the run to avenge his wife and clear his name; but who can he trust?

While clearing one’s name in a world of telepaths might seem easy enough, Scott-Norton makes full use of both the issues that beset real life and the limitations of his version of telepathy. While one might be innocent of this – or any – crime, would one wish to have the government rooting around in your head, or trust them to not to claim they found something; and even if one does let a scan occur, unconscious issues can block access to memories, creating a suspicion of deliberate concealment.

Jack makes an excellent protagonist. His telepathy only revealing itself after he married and the job of Remnant Keeper involving invasive cybernetics, he is an emotionally troubled man before his wife’s murder. This both makes his decision to uncover the truth himself rather than trust the police especially plausible, and strips him of the support network that most people would rely on if they needed to.

The supporting cast are equally plausible members of their society: Jack’s handler is determined to keep him out of the hands of the police, but more to avoid issues for the Remnant Keeper program than out of friendship; police officers are distrustful, but vary in their opinion of telepaths as a whole; some anti-telepath protestors act from genuine hatred, but others see the conflict as an opportunity to gather unthinking followers for their own purposes.

Overall, I enjoyed this novel. I recommend it to readers seeking gritty science-fiction set in an intriguing world.