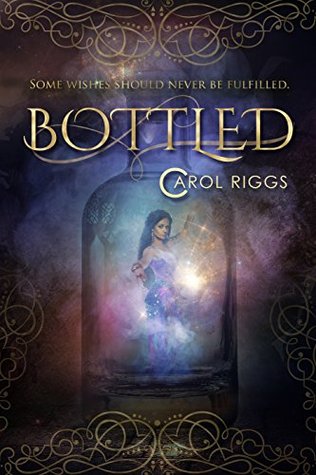 Weaving the modernity of teenage romance with the archetypes of the Arabian Nights, Riggs creates a tale that will interest fans of both character and world-building.

Transformed into a genie by an evil sorcerer, Adeelah has spent a thousand years fulfilling the whims of a succession of greedy owners. Only a note from Karim, the boy she loved as a human, saying he has the elixir of life and will never stop searching for her keeps hope alive. However, Faruq, her first master, also seeks her through the ages, and will stop at nothing to reclaim her. After changing owners once more, Adeelah finds herself bound to Nathan, a man who sees her more as a friend than a servant; but will his kind-heart be a source of strength or a liability when Faruq finds them?

With a supernatural protagonist who, rather than struggling with the violence or hunger in their own soul, is forced to obey the whims of the most base masters, Riggs has created a fresh twist on the battle between power and conscience that is common to urban fantasy.

The paranormal romance side of the plot similarly deviates from the standard arc of supernatural protagonist and mortal protagonist not getting along then discovering they are perfect mates. Adeelah’s love is lost to her in time and space; hopefully kept alive by the elixir of life, but almost impossible to find in a century where anyone can travel the world.

Instead the tension that marks Adeelah’s growing friendship with Nathan is that the first master she’s found who might allow her to hunt for Karim is also the first one she doesn’t want to abandon.

However, Riggs does not open with the comfort of an ethical master. Beginning just after Adeelah’s bottle is stolen from an archaeological excavation, the novel shows the usual course of Adeelah’s servitude in all its tawdry venality. Following not one but two selfish owners, Riggs provides readers with a firm grasp of the rules of genie magic without revealing whether Adeelah has the power to solve her own problems if someone were to allow her.

In addition to providing a vehicle for smooth exposition, this period of being buried followed by years hidden away by paranoid masters creates a plausible reason for Adeelah to not understand that modern technology might make it easy to find Karim or allow her achieve other goals without needing her owner’s wish to release her powers.

Where Rigg’s skill at portraying naivety might be more divisive is in the actions of Nathan and the other non-adult characters: filled with the oblivious certainty and crippling doubt of youth, they spend weeks wondering whether or not another character would date them where an adult might find the answer by asking. Depending on a readers preference, this will either inspire empathy or a desire to just lock people in a room until they sort it out.

Half eleventh-century girl and half fount of inconceivable power, Adeelah is an interesting protagonist. Unable to deny a master’s wish, or even use her power without her master wishing it, she strives to serve people she despises perfectly in the hopes they will wish her even a moment of power for her own desires.

The supporting cast are equally interesting. While each person who finds or seeks Adeelah has their inner self exposed by the acquisition of ultimate power, they are each limited by their imaginations; as such, they remain plausibly human.

The exception to this rule is Faruq. Waxed strong on the unnatural life of the elixir, and aware of other ways to access great power, he oozes through the book unconstrained by either morality or imagination, seeking Adeelah merely for the convenience she brings.

Overall, I enjoyed this book. I recommend it to readers seeking a different take on paranormal romance or a modern fairytale.