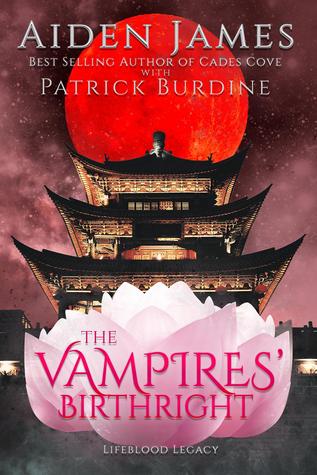 Combining a choice between two, probably unsuitable, immortal lovers, with evil monsters roaming large parts of the world, James and Burdine create a paranormal romance free from the sense of tightness that can afflict the “girl with a destiny encounters a secret vampire conspiracy” novels.

This novel is the second volume in the Lifeblood Legacy Series. Following the attack on Racco’s chateau by Ralu’s armies, Txema is taken a vampire court in the mountains of China. However, with Txema and her unborn child the last bearers of the mystical blood needed to keep vampires sane, Ralu continues his plan to either control or destroy her; and with her vampire society itself. Divided from her family and taken to a place even stranger than the Western vampire courts she barely understands, Txema faces not only enemies without and within, but also creatures that will kill her simply for offending them.

As with the previous volume, this book maintains a good balance between vampires as clearly defined creatures and the differing myths of different areas. This is particularly noticeable in the Chinese vampires, who maintain an air of mystery without displaying powers denied to all Western vampires.

This balance is aided by the combination of protagonist and plot: lacking the experience to put things in proper context, and spending her time hiding (or being forcibly hidden), Txema – and thus the reader – only have a glimpses of the whole.

However, this lack of explanations might also frustrate readers who enjoy vampire tales for their perspective on vampires: while there is nothing that explicitly contradicts the metaphysics established in the first volume, there are some areas which lack evidence of how they fit.

Again in common with the first volume, the plot is filled with riches and international travel, placing this firmly at the vampires-as-immortal-heroes end of the genre; however, this is entirely consistent with a paranormal romance rather than gritty horror interpretation of the trope; and is certainly a plausible lifestyle for ancient beings with human drives.

While this novel takes place immediately after the previous one, Txema’s personality has matured. She still misses her family, but has – plausibly – accepted that she needs to accept a part in someone’s plan to survive. Her real dilemma is picking which person to ally with: the vampires who claim to care for her, but also need to feed on her; or the immortal alchemist who claims to love her, but has had many lovers in the past.

The reoccurring cast have also grown in complexity. Seen through Txema’s eyes, most appear more caring and human than in the first volume; however, they also display more evidence of being blood-drinking creatures beneath their veneer of humanity.

As befits the sequel to a country-spanning tale of ancient evil, Ralu and the other antagonists are more monstrous. In addition to maintaining the sense of peril, this provides a strong enough contrast with Txema’s potential allies to maintain their sense of dark heroism.

Overall, I enjoyed this book. I recommend it to reader’s seeking a vampires-as-flawed-heroes tale.