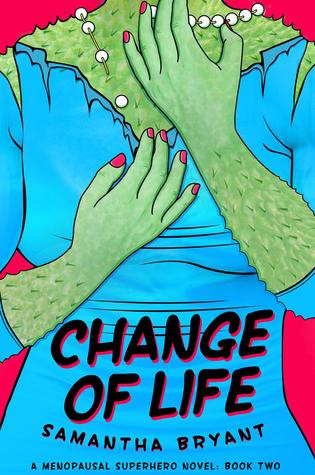 Mixing questions of gender and age bias with fast-paced fights and nail-biting reversals, Bryant continues her exploration of mature superheroism.

This is the second volume in the Menopausal Superhero series. Following the defeat – and subsequent escape – of mad scientist, Cindy Liu, Linda/Leonel (the tiny woman in a strongman’s body) and Jessica (the lighter-than-air ex-gymnast) have joined the Department, a secret organisation dedicated to investigating and restraining the odd and freakish. Meanwhile, Patricia (the sometimes lizard person) has taken early retirement so she can devote her time to hunting down Cindy. Learning the skills needed for their new lives is trouble enough, and then Patricia is kidnapped by a dead man.

As with the previous volume, Going Through the Change, this novel is a mix of classic superhero action and character-driven realism. However, this time the placement of the Department front and centre gives Bryant an opportunity to reframe a few of the tropes of superhero teams: the training montage, the romantic subplot involving support staff, the enigmatic head of a secret organisation.

And, like the previous volume, the book focuses on the experience of those society has deemed past their prime: in this case, the challenges of adopting a new role later in life.

Leonel/Linda has come to terms with now appearing to be a phenomenally strong man, but not with acting like a man. Surrounded by the hyper-macho subculture of the Department, s/he strives to not show sadness, to casually urinate, and to discuss hotties. And, if going through the struggle to fit in for a second time weren’t enough, her husband and family, willing to accept her sex-swap, are less willing to accept that s/he can’t be a government agent and still be there all the time to cook, clean, and support her extended family.

Jessica faces a similar cultural barrier. With the coming of amazing power, she has found her self-respect; but little experience in either violence or the world of work, she lacks an understanding of being the junior member of a secret team, or when and how to take initiative.

Patricia suffers the opposite issue: having lost her connection with mundane work after the events of the previous book, she is equally uncomfortable with the freedom of retirement. If she starts the day early, her afternoons gape empty; if she doesn’t, decades of waking for work niggle at her. And neither extensive corporate experience nor bullet-proof scales prove much use in tracking a scientist who might be ageing backwards.

Further showing that even with great power, the majority of problems have mundane solutions, Bryant adds a new protagonist: Mary, a shop assistant with no unusual powers or skills, who is seeking her mother, Helen (a fire-ball-throwing bully).

Both comic and serious, rip-roaring adventure and portrayal of intersectionality, over-the top and realistic, this novel gives a plausible portrayal of how the world might be with superheroes without losing the casual building-shattering and escapism.

Overall, I enjoyed this book immensely. I recommend it to readers seeking superhero fiction that is deep without being depressing.

3 thoughts on “Change of Life by Samantha Bryant”