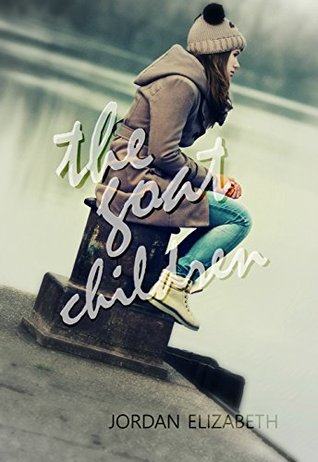 Mixing the mundane irrationality of dementia with hints of underlying mystical reason, Elizabeth creates a tale that will resonate not only with teenagers feeling the burden of adulthood descend but also with anyone who has wished there were something more than biology behind the incoherence of a friend or relative.

When Keziah was young her maternal grandmother, Oma, was always the one who solved her problems, and Oma continued to be a distant but fixed point in Keziah’s life after her parents moved the family to New York. So when Oma is diagnosed with dementia, Keziah volunteers to move in with her so she needn’t go into a nursing home. However, Oma is no longer the person Keziah knew: at turns paranoid, forgetful, and confused, Oma actively resists help; and when she isn’t rude, she rambles about a past spent as a Pegasus-riding mystical warrior. At first Keziah is glad for the moments of rest, but as events match Oma’s stories she wonders if the Goat Children are more than a fantasy.

While this novel shares both Elizabeth’s style and her focus on the struggle of a teenager to find their place in a world that doesn’t utterly make sense, it is more ambiguous than, for example, Cogling. Rather than starting in a fantasy world and exposing the reader to the nuances of it or introducing a variant on the legends common to teenage society and reweaving the threads into a new, yet still magical, truth, The Goat Children provides only evidence that doesn’t contradict the existence of another world hidden within the mundane: even the most direct of statements occur in situations where a character’s perceptions could be flawed. As such, the reader is left to decide whether Oma’s tales are true or merely childhood stories filtered through Oma’s dementia and Keziah’s hope.

Indeed, much of the book is not about a hidden force for good. Torn between caring for her grandmother despite the resistance and having even fragments of a life of her own, Keziah races between a home where she is seen as a gaoler and enemy, and a school where she is seen as an attention-seeking freak.

Drawing all the threads together is Elizabeth’s portrayal of living with a victim of dementia. Each agreement Oma makes is forgotten. Each explanation Keziah gives her is countered with imagined evidence. And each outsider sees only the days Oma is together enough to interact in public, or the moments day-on-day of baseless accusation and passive resistance have worn away sufficient of Keziah’s endurance that she reacts poorly.

The poignancy of Oma’s decline is further shown by Elizabeth’s use of brief anecdotes from Keziah’s childhood at the end of each chapter. With each example of Oma bringing joy and removing sorrow, Keziah’s desire to care for her becomes both more plausible and more clearly a struggle between reality and hope.

Keziah is an immediately sympathetic character, both determined to do the right thing and plausibly ill-equipped to face the slow death of reason. Battered by her grandmother’s intractability and the vicissitudes of teenage society, she struggles to be a responsible adult without giving up all her dreams; steadfastly sure she acts out of love, yet without the maturity to ignore the shallow judgements of family and acquaintances.

Oma is a similarly nuanced character. Her shifts from paranoid to loving, from confused to razor-sharp, are neither predictable nor random, leaving the reader with the feeling that there is an underlying sense to her actions while denying them solid evidence.

The supporting cast are also well-crafted. Filtered through Keziah’s growing frustration, yet still possessing distinct qualities, each sits on the boundary between tools of an evil scheme and casually lacking in true understanding of Keziah’s struggle.

Overall, I enjoyed this book. I recommend it to readers seeking a nuanced portrayal of losing a loved one to dementia or a tale that leaves the existence of magic open to interpretation.