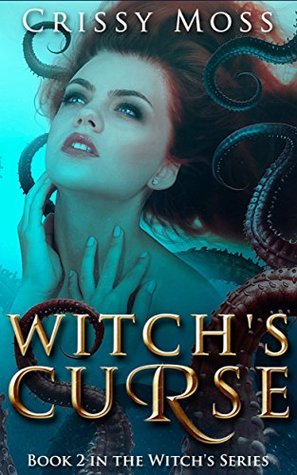 Combining the epic power and constant peril of classic fantasy with nuanced character development and social conflict, Moss weaves a tale that both shows world-spanning tyranny and puts a human face on the cost of resistance.

This novel is the second volume of the Witch’s Trilogy. While I’ve put a Friday morning sort of effort into avoiding too many, this review does contain spoilers for the previous volume.

Following the death of her parents and the reshaping of the death curse imposed by the Acolytes, Okira has fled even further from civilisation. Hidden on a tiny island, with only Brother Hawk and Salvia for company and only magical training to pass the time, she struggles to resist the call of the deep inherited from her Merman father. A struggle she is winning until a playful water spirit throws her into the ocean. The moment Okira touches the water the Kraken, and the Acolytes who worship it, know were she is again. She must flee again, but this time she refuses to simply hide.

Expanding the geography, society, and magic of the previous volume without sacrificing focus, Moss has created a second volume that balances sympathy with discovery. The book is also free of the explanatory prologue or opening reprise common to series that can, if mishandled, destroy a reader’s momentum before it has built.

Indeed, Moss – if anything – verges toward not repeating details of events from the previous book. While this makes both thoughts and conversations seem more like those of real people who, knowing the events they have experienced, only express snippets and oblique references, it also requires the reader to recall those same details with little prompting. As such readers who have not read the previous volume recently, or at all, might find the opening chapter confusing in places.

In contrast to this, the ending is both decisive and satisfying. Despite this not being the middle book of the trilogy, it not only closes the immediate arc and many of the threads from the previous volume, but also leaves events such that readers would not feel cheated were the story to end there.

Moss applies the same mix of expansion and focus to the characters. As Okira grows to adulthood so do both her power and the instinct to enter the ocean. Torn between gratitude to the two people who gave up everything to keep her safe and a sense of being trapped by their belief she is still a child, she grabs at any opportunity to act with the naïve expectation of immortality common to the young.

Brother Hawk and Salvia equally fight struggle against the potential costs of keeping Okira alive, each endangering the goal by their determination to not sacrifice it completely. Hawk, newly freed from a life of stealing witches for sacrifice, becomes ever more focused on protecting Okira from any risk; even if it means her spending her entire life in hiding. While Salvia, after lifetimes of hiding children from the Acolytes, sees Okira’s power as the only way to end the threat permanently; even if it means risking everything by fighting back.

Overall, I enjoyed this novel. I recommend it to readers seeking fast-paced high fantasy that doesn’t revolve around the classic questing group.