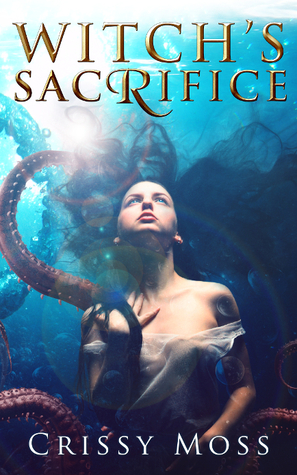 Mixing a fresh take on high-fantasy tropes with a realistic version of young love, Moss creates a tale that will appeal to both lovers of epic struggles against evil, and those seeking a more personal narrative.

Since the goddess abandoned her people, the islands have been plagued by the evils of magic. Only the tyrannical Acolytes, servants of the dread Kraken, prevent witches from enslaving or killing everyone. Or at least that is what Marizza has been taught since birth. But when the unwanted advances of the town bully trigger her own magic, she discovers it might not be that simple.

Set on a chain of island kingdoms, the premise of a brutal sect achieving great power through the propitiation of an immense sea monster is immediately plausible. And the early example of random destruction caused by an untrained witch panicking makes the hatred of magic all the more realistic.

Building on this solid deviation from the usual rolling hills, walled cities, and looming mountain ranges of high fantasy, Moss creates an equally plausible image of village life. Despite the supposed moral stance behind the Acolyte’s actions, Marizza’s problems grow through the medium of gossip, shunning, and petty self-interest rather than anyone taking responsibility for hard choices.

Moss continues to deviate from the classic model, once Marizza flees her village. Although there is a wise mentor, the book neither spends chapters on a series of comic or tragic learning disasters, nor reveals Marizza as a prodigy destined to learn faster than all others. Instead, Marizza learns in fits and starts as her emotions conflict with her nascent understanding of power.

It is these emotions that provide the second thread to the novel: romance. But, again, Moss does not make this the sweeping love of troubadour’s tales or the burning passion of soul mates. Marizza displays the realistic struggles to understand whether flirtation is based on something genuine, and whether liking some aspects of a person outweighs disliking others.

Where the book is closer to legends is in the fight scenes. While the combat is brutal in places, it is also often in the heroic mould; as such, some of the descriptions focus more on drama than perfect feasibility. This fits well with the high-fantasy tone of the book as a whole, but might irritate readers with a strong interest in fight choreography and the qualities of various weapons.

Apart from the occasional moment of superlative combat prowess, the main characters are each a solid mix of competence and ineptitude, there journeys shaped more by responding in ways consistent with their beliefs than by the needs of the plot.

The supporting cast are slightly less complex; however, fanatical priests and self-indulgent adolescents are a fitting backdrop to high fantasy, so add colour rather than reducing depth.

Overall, I enjoyed this book. I recommend it to readers who enjoy high fantasy with a focus on character rather than sweeping battles.

One thought on “Witch’s Sacrifice by Crissy Moss”