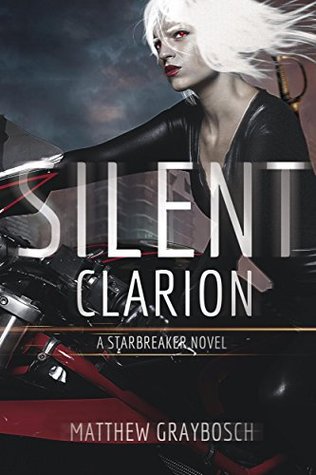 This review is based on an advanced copy of the entire novel, rather than the serialisation. While every attempt has been made to minimise transcendence of physical knowledge, parts of the review might trigger an n-dimensional vector transform, producing the neurological phenomena commonly called a spoiler.

Set seventeen years before the events of Without Bloodshed, this novel focuses on Naomi Bradleigh. Naomi works as an Adversary, the half-assassin half-investigator troubleshooters who protect post-collapse society from the corruptions of the past. Feeling if not yet breaking under the stress of her vocation, she takes some time off to unwind. However, a fragment of conversation about mysterious events in Clarion, USA, overheard by accident, niggles at her until her leave becomes a working holiday.

Graybosch creates an interesting world of light-handed and benevolent totalitarian rule against the background of a world that has rebuilt itself after a global collapse. This allows Artificial Intelligences and cutting-edge technology to sit comfortably next to ubiquitous mêlée combat and secrets hidden in the backwoods.

In addition to skilfully reframing both high-tech and post-apocalyptic science-fiction, Graybosch includes an equally engaging metaphysical background. While the currently powerful religions of the modern world still exist they are legally matters of personal belief not exceptions to the common rule, and the calendrical faith is a species of paganism. This permits interesting hints that events might have a more than scientific basis without needing to adopt the standard tribal rigidity of established religions.

Where the world-building might be more controversial is in the music. Many of Graybosch’s characters (as with the author) love music, particularly variations of rock and metal, so there are frequent mentions of, and conversations and internal dialogues about, bands and music. Depending on the reader’s preference this might either add a sense of the story having a soundtrack or distract from the story that they are interested in.

In addition to the in-world music and obvious real-world references contained in chapter titles and such, Graybosch has also sprinkled the novel with names and descriptions taken from metal, rock, and other geek cultures. For the most part, these are smoothly integrated into the prose, both allowing the book to be read without knowledge of these things without feeling the story is stilted or confusing, and giving those readers who wish the opportunity to hunt for Easter eggs.

However, in one instance it might stretch credulity. One group of connected characters share names from a single novel without any indication they changed their names to match. As such – while it is not an impossible coincidence – it is noticeably more coincidental than the rest of the novel.

Naomi Bradleigh is both recognisable as and distinct from the character in Without Bloodshed. Having become an Adversary to fund her studies, her motivation is a mix of abstract belief in the idea of Adversaries and desire to fulfil her side of the contract, rather than any personal desire to kill evildoers. As such her major conflicts are not with whether she can solve issues, but whether and how she should.

This focus on moral competence rather than functional (a quality common in the portrayal of many of the characters), avoids the question of whether or not she is a “strong female lead” by moving straight to her being a complex protagonist who is female.

The supporting cast are similarly people who possess a set of qualities rather than people defined by one of them. So – although they are the cast you would expect in an action thriller with a metal soundtrack – they are not shallow.

There as also a few cameos from younger versions of the cast of Without Bloodshed. As with Naomi these are both recognisable and distinct, serving as a new perspective for readers who have read Without Bloodshed yet requiring no knowledge of that book to see them as complete characters.

Overall, I enjoyed this novel greatly. I recommend it to readers seeking fast-paced science-fiction.

One thought on “Silent Clarion by Matthew Graybosch”