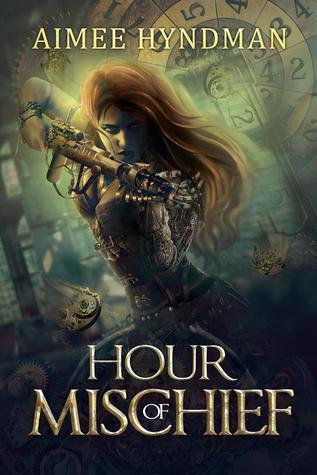 Combining a fast-paced, character-focused plot with a deep and complex world without either skimping or bogging down, Hyndman creates a story where humans can meet gods without being merely accessories.

Born to the underclasses, Janet Redstone and her friends both make their living and calm their anger by stealing from the rich. With the twelve major gods of her world having given her nothing, she instead gives passing worship to the creator of the universe, the Clockmaker. But when the ill-luck that has kept her from real success results in her entire gang being imprisoned, her only option is to make a deal with a man who claims to be the god of tricksters; a claim he seems both able and willing to prove as often as it takes to drive her mad.

Most intriguing of these variations on fantasy steampunk is the method of associating both the hours of the day with the major gods, and the areas of the map with the hours of the day. Religion suggests that this makes certain times and places more suitable for certain tasks. However – unlike many novels where the gods are openly present – different characters hold these beliefs more or less strongly, counteracting the reduction of free will that active deities can bring.

Where Hyndman’s metaphysical world-building is weaker is in the choice of name for the god of wealth: Amontillado. Although the image of expensive sherry fits well with a god of wealth, it is potentially too comical for the gritty feel of the rest of the novel; a niggle made more prominent by the other gods not having the same immediately referential names.

In addition to creating a complex and interesting world, Hyndman successfully provides the reader with enough about it to understand the wider picture without losing the immediacy of events beneath long expositions and asides.

The plot is similarly solid. Beginning with Janet’s very narrow concerns it expands swiftly but plausibly to a situation fitting for the involvement of gods. While it is firmly heroes-saving-the-world fantasy it avoids the distance from which epic fantasy can suffer.

This novel is the first in a series, so the major plot remains outstanding at the end. However, it does reach a natural break point, and the arc commenced with Janet’s arrest is resolved. As such, while it might leave the reader wanting to read on, it feels like a complete book rather than the first section of a part-work.

Janet makes a strong and sympathetic protagonist. Her dislike of the gods drives her to succeed, yet is also an obstacle when she meets them. Her upbringing has left her with a narrow view of the world, yet also given her an instinctive adaptability. Forced to be adult before her time, but too young to have real perspective, her actions are both flawed and entirely plausible.

Although a few of the walk-on parts, such as unnamed guards and party guests, are stock characters, the supporting cast shares Janet’s complexity. This dynamic balance is especially skilled in the gods: displaying an intensity befitting the physical embodiment of a concept, they nevertheless have the resonance of personality displayed by the deities of any pantheon in the real world.

Overall, I enjoyed this novel greatly. While it might be aimed at the young adult market, it is not simplistic; so I recommend it to any readers seeking a fast-paced fusion of steampunk and high fantasy.

I received a free copy from the publisher in exchange for the fair review.