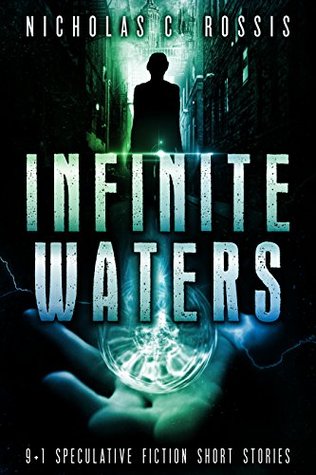 Focussing on aspects of character and the narrator’s immediate perceptions rather than complex details and world building, Rossis creates a series of tales that are about immediate challenges rather than the epic expanses of fresh worlds.

Several of the stories include a twist ending. While I have attempted to avoid mentioning those details, this review might contain spoilers.

This collection contains nine short stories of varying length, from flash fiction upwards; eight of the stories being framed within the eponymous ninth.

As with Rossis’ previous collection, The Power of Six, the factor that will most determine whether a reader enjoys this is collection is their stance on twists and surprises. Readers who like the zing of events shifting into a new image with hindsight will find plenty to enjoy; those who prefer an ending to grow from the story are likely to feel starved of critical facts in several of the stories.

When not setting up a reveal, Rossis continues his use of fiction as a method of intellectual exploration. In parallel with the more characterful aspects, a strong thread of what-if and why-is runs through many of the stories, providing the reader with a more intellectual stimulation.

The structural trope of having otherwise unconnected stories as tales told to a character in another narrative has a history as long as writing. Unfortunately – while Rossis doesn’t overwhelm the eponymous story by having the other eight stories each resolve a critical part of the overarching narrative – neither does he make more than a most basic use of the structure. As such the sections of ‘Infinite Waters’, some of them only a paragraph long, seems somewhat disjointed in places, and lead to a dénouement that lacks inevitability even in hindsight.

Stylistically, the collection is also distinctively Rossis in both language and description.

The prose strongly follows the guides of formal grammar, most noticeably in the lack of contractions. Although this fits some situations, and could go either way on non-human narrators, it gives both the speech and narration of many characters a slightly stilted archaic feel which can detract from the more emotive areas.

In contrast to this sense of a particular time created in the grammar, the description deliberately avoids narrowing except where necessary. Except where the story draws from a particular time or place, such as ‘The Things We Do for Lust’, the background detail is kept general, leaving the reader to fill in what sort of car a character has and such. Physical descriptions of characters are similarly minimal, many characters not even being given names. For the most part, this means characters and events are rendered more sympathetic by being painted in the reader’s own imaginings.

However, it could also irritate those readers who are strongly interested in the nuances of a particular subject or in exploring new places through fiction, and amplifies the sense of only seeing what Rossis chooses to show that the reveals create.

Overall, I enjoyed this collection but am unsure whether I will return to all the stories knowing the twists. I recommend it to readers who enjoy a sharp reveal or a more openly thought-provoking aspect to their speculative fiction.