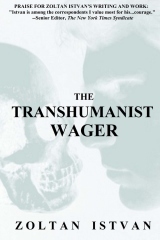 Combining the perspective of Ayn Rand’s Atlas Shrugged with a catalogue of advanced technologies, Istvan creates a book that is more polemic than plot.

Coming toward the end of his university course and vituperated for his radical transhumanist agenda, Jethro Knights embarks on a voyage around the world in a boat he built himself. While travelling he accepts a job as a roving journalist; a job that exposes him to the real fragility of the human body. Returning to a United States that increasingly rejects transhumanism in favour of a narrow interpretation of evangelical Christianity, he finds his determination to overcome humanity first ridiculed then punished.

Istvan prominently mentions this novel having being a best-seller in philosophy, and as a work of philosophy it is filled with thought-provoking arguments in favour of aggressive transhumanism. However, these often take first place to the plot and characterisation making it less accessible as a novel.

While the struggle between religion and science is at the forefront of this novel, Istvan’s transhumanism ironically wins through the most divine of methods: the author-as-god rigging the game.

Istvan first slant is to divides the world into three groups: aggressive transhumanists, supporters of aggressive religions, and the stupid. Consigning the majority of the world population to the third category, he tidies them away into an audience to the main event and forgets about them. Leaving him free to showcase a battle between his version of transhumanism and a narrow subset of religion. Thus, while the reader is likely to wish that Knights and his supporters succeed, many will desire it by comparison to the alternative only: the same desire that would support the NKVD against flesh-eating alien invaders, rather than a purer active agreement with the methods used. While Istvan might have arguments against the many religions and philosophies that do not advocate submission, his total focus on the worst of Abrahamic religion (with a brief mention of Hindus) might make it seem he is picking battles he can win

His second is a similar simplification of technological achievement: effectively defining transhumanism as winning all battles. The replacement of the internet with a faster, more efficient version is described with a single sentence declaring it happened in the middle of a long list of similar sentences declaring improvements caused by transhumanists. Other amazing advancements take up to a paragraph; but, often only because the laundry list of things they can do would not fit in a single sentence.

Even where there is some challenge, it is quickly defeated by transhumanists at little cost. A single missile manages to overcome the hacker who has single-handedly hacked a multinational fleet in real-time, but the transhumanists’ missile defence shoots it down before it does real damage. The hacker immediately works out what went wrong and deals with a larger threat with no effort. With all the tension stolen by low-cost inevitable success, readers might find it hard to care when the transhumanists face their straw-man enemies.

Knights himself is a character almost perfectly designed not to support a novel. He feels no fear, so the reader has less reason to feel tension. While he does feel other emotions, he puts them aside in favour of transhumanism without any real cost to himself. Starting the book as merely hard-to-empathise-with and monomaniacal, Knights loses what little pretence of being a complex character he had when he launches into his second multipage speech to the world setting out his radical beliefs.

Therefore, while this book is an interesting piece of philosophy, I found it neither entertaining nor convincing either as an argument or a narrative. I recommend it to readers seeking an introduction to one version of transhumanism.