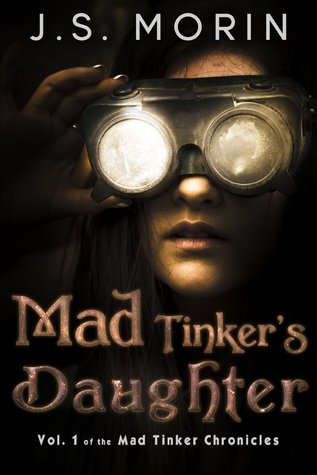 Relying more on nuance than gross difference to separate cultures and places, Morin creates a world that is both obviously not our own and immediately recognisable as real. While this novel does not skimp on either action or fantastical technologies, it is also strongly founded in character and not novelty.

Rynn lives in a world where most humans are slaves to other races. Eking out a living as a University cleaner, she spends her free time building devices to fight against her oppressors. Madlin Errol is the daughter of the Mad Tinker, one of the most powerful and respected engineers in her world. But they are also the same person: when one sleeps they awaken as the other. Madlin’s father is gathering all those humans who share this power of split lives for some grand and secret scheme, but Rynn sees too much injustice in the world to wait. With both great talent and twice as much time to experiment, she can make a difference: but will she also make things worse?

The idea of people’s dream lives being real is not new. However, Morin’s take on it feels fresh. Rather than the common tropes of the dream realm being malleable, fickle, surreal, or in otherwise unlike reality, the twin realms of Korr and Tellurak are – while different in culture and environment – both “reality”. This equality removes the inherent bias that might otherwise make the reader automatically choosing the real world over illusion; and thus makes the conflicts between benefiting one or the other more resonant.

While each world is rendered realistically, they are both solidly fantasy worlds, possessing technologies on the border between magic and alternative science.

Korr, the world of oppressed humanity and ancient powerful races, has the decayed grandeur of a long past and a mysticism grown from slavery and decadent civilisation.

Whereas, Tellurak, a world apparently solely of humans, has the entrepreneurial shininess of a world filled with the free and ruled by those who escape their slavery by sleep.

But both also share common themes: the plans of the powerful are handed down in pieces with the expectation they are both benevolent and right; and progress belongs to those who make it. This creates a reason to favour one over the other, while adding a suspicion that neither is actually a great society.

Rynn/Madlin is a skillfully written protagonist; or protagonists, as the divided personalities present differently to the different worlds. As Rynn she lives a secret life as a terrorist, using her public face only to eavesdrop on engineering lectures and sneak texts from the library. As Madlin, she is free to study and experiment, but still rebels against her father’s belief that she doesn’t need to know his full plans.

However, Madlin/Rynn’s youthful rebellions, might also be the part least engaging to the reader. Despite, or perhaps because of, Morin’s plausible portrayal of the mixture of poor impulse control and iron self-belief of a teenager, there are moments when a reader who prefers protagonists with a mature outlook might feel frustrated by the lack of introspection and trust.

This portrayal of distinct but similar masks on an inferred core extends to several of the other twinned characters in the novel, giving a stronger and more nuanced insight into the two cultures by evidence of their effect on different people.

However, by displaying that the persona of a character in one world might not reflect their plans in the other, Morin also undermines the reader’s certainty that a twinned character seen from the perspective of only one world is as they seem. Combined with open collaboration from some characters, this makes each time Madlin trusts someone in Tellurak take on the undertone of possible betrayal, adding a resonance of conspiracy that reduces the reader’s distance.

Although the shared worlds and the characters who exist in both are at the heart of this book, Morin does not skimp on the single-world narratives. Those confined to one world face problems of equal scale and complexity, and are rendered with equal depth; and those who can switch between worlds, find neither life merely an obstacle to or tool for their goals in the other.

Overall, I really liked this novel. I recommend it to readers seeking a solid steampunk adventure with complex dilemmas.