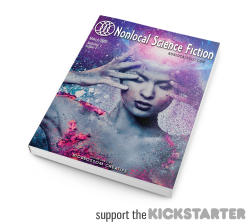 Taking as his guide that the best short stories are those that focus on a single idea, Dombrowski has gathered both hard sci-fi and softer, more speculative fiction, from new and independent authors. This choice of focus rather than style or subject will make the magazine a good source of fresh authors for science-fiction fans of all flavours.

This issue contains eight short stories and the first chapters of two serials:

With such a broad range of styles and subjects, it is perhaps inevitable that a reader will prefer some stories over others, or notice apparent issues that others would not. However, they are each strong examples of their sub-genre.

Unsurprisingly, the weakest area of the magazine when viewed as a single item are the two series; but, despite the inevitable failure to resolve the main plot, both do contain a well-structured episode arc, allowing all but the most rabid anti-serialisers to read them as a short story if they wish.

Overall, I enjoyed this magazine. I recommend it to readers seeking short science fiction or fresh authors to add to their reading lists.

I received a free copy from the editor with no obligation to review.