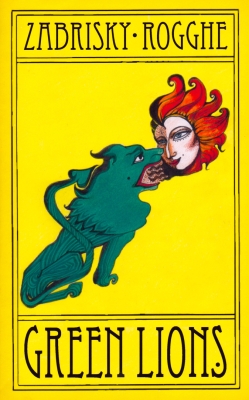 Avoiding both making words their tool and the rules of writing their master, Rogghe and Zabrisky enfold language as a co-conspirator in their poetic egg. Merging the radical collaboration of the early surrealists with the entirely personal secrets of alchemy, they initiate a manual for transformation that would have saved Jerry Cornelius books-worth of angst and ultra-violence.

On the surface this collection contains twenty-two poems, in a variety of forms, each illustrated with a monochrome line drawing. Looking slightly deeper, each poem has a possible connection with the twenty-two major arcana of the Tarot. Moving beyond the perspective on external structure, the collection as a whole hints at a single meta-language formed of the white-space between the socially assumed separation of its authors (or something like that).

Continuing the balance between imposed structure and unified interaction, the collection is divided into sections named after the five alchemical elements: Earth, Water, Air, Fire, and Ether. However, the sections neither follow the traditional order, from most solid to intangible, nor provide an obvious division of the poems by common theme or style.

You said it was the color
Of a word I’d forgotten,

Although taking this strong resonance from the most serious and deep topic of forging the enlightened self, Rogghe and Zabrisky are also having fun. From the simple pun of ‘anti-bodies’ to the chortlesome yet descriptive image of ‘stomachs tense as angry wildebeest’ the poems are filled with linguistic smiles (and similes).

This gestalt of humour and insight extends to the topic also. Los Vegas Airport Duet ends with the conceit that, because a poem has value, someone can bail themselves out with a long enough stanza.

roots sprouted tails and wings
words were nouns and verbs and adjectives
all at once
they clustered
turnip, beet-like
midnight spider-bat-carrots
with orange and yellow antenna knots
hair ends split
clods of rich mud stuck to the appendages

– The Archaic Language Of The Body

This thread of metaphor as absurdity and truth is especially strong in ‘The Archaic Language Of The Body’. Couching the evolution of language away from its roots in the most earthy terms, it raises the dichotomy between communication becoming an ever-more-abstract image of reality, and language constantly growing towards greater relevance by abandoning no-longer-true usages and meanings.

The illustrations share the looseness and focus on expression over form of the poetry. Hovering on the line between beauty and naïvety they tempt the reader to give them value by association, or to treat them as sketches expanding the message rather than art in their own right. However, as with the Tarot itself, the truth might lie closer to the deep symbols of the psyche being most beautiful when they are free of external value.

Your nails cut
Through my shoulder blades
And pull out buried wings.

– My Bird For You Is A Swan

But perhaps, ultimately, the message of the collection is that there is no message other than the journey we take ‘into the Unknown / together / skin to skin / your eyes in mine’.

I enjoyed this collection immensely, and will be re-reading it repeatedly. I recommend it to readers seeking the option to enjoy aesthetic sentences or search for deeper meaning as the whim takes them.

I received a free copy of this collection in exchange for a fair review.

One thought on “Green Lions by Simon Rogghe and Zarina Zabrisky”