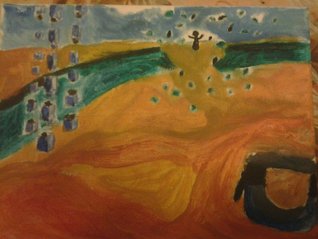 Unlike many authors narrating stories with a strong element of religion, Watt neither ignores other religions nor consigns them to falsehoods and evil magics. Instead he posits a world in which the benefits of any honest faith are the benefits of the true faith. Similarly, he does not condemn science itself. Combined, these acceptances add immensely to the sense this novel is about a world-spanning invasion by aliens rather than a crude allegory.

When aliens invade Earth and kill his father, James O’Keefe takes refuge in a nearby military facility. At odds with the leader of the bunker and thirsting for revenge, he returns to the surface and is quickly captured by the aliens. Faced with a choice between submission to the God that let his father die and the benefits of collaboration, he soon abandons his revenge for a place beside Mendax, the alien’s leader.

The story is an interesting fusion of classic alien invasion sci-fi and the inner struggle for faith in a violent world. While this book does have a strong theme of Christianity running through it, it functions equally well as a tale of the various responses of humanity to a more advanced race.

Not content with showing commonality in human religion, Watt provides a picture of commonalities across the universe, rejecting the strict interpretation of Genesis that holds only the descendants of Adam and Eve are capable of salvation but in so doing making the alien invaders morally culpable rather than a merely mechanistic threat.

Watt even provides a mostly plausible explanation for why both species of alien James encounters speak Latin. The additional clues this circumstance provides to readers who can read Latin provide a pleasant confirmation of theories rather than a weakening of tension.

Unfortunately, the flow of the story is impaired by many minor typographical errors: in addition to frequent issues with capitalisation there are many transpositions of homonyms (e.g. ‘vein’ for ‘vain’). Combined with inconsistent margins and paragraph breaks, these make it hard to remain fully immersed in the story.

James is solidly written, portraying an entirely plausible struggle between the mundane realities of survival and the existential conundrum of self-sacrifice without expectation of benefit.

This sympathetic picture of the extremes people might go to in order to survive, and the banality of the horrors they might commit, extends to many of the supporting characters.

Unfortunately, the flexibility Watt applies to both the overall metaphysics and the mundane struggle to survive the invasion seems to desert him when characters of strong Christian faith are seeking to show James the path to salvation. Rather than the inclusive language of a world-view that lets aliens be saved, much of the ‘explanation’ of God’s love is unthinking submission to dogma that would not be out-of-place in an 11th century sermon on the place of serfs in feudal society.

This reiteration that James is at fault for all failures and God for all successes, delivered in a way designed to attack James’ sense of worth, makes James’ acceptance of Christianity appear to be despite, rather than because, of the Christians he meets.

Overall I found this book mostly entertaining. I recommend it to readers seeking an engaging invasion narrative, who do not have issues with a very strong Christian theme.

I received a free copy in exchange for a fair review.

2 thoughts on “A New Kingdom by Thomas M. Watt”