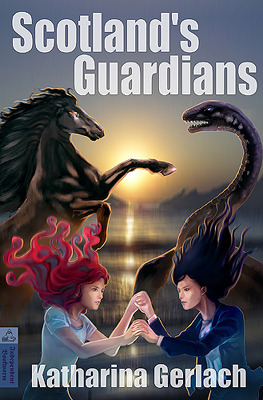 Although Gerlach has written this novel for the young adult market, it does not have the simplified plot and self-absorbed characters of many YA titles. This makes the book equally engaging for fans of straight fantasy.

For as long as she can remember, Bryanna has been raised by her father, a cryptozoologist. When she was young the myths and legends of Scotland fueled her imagination. But now she is growing up they are tinged with embarrassment that her father seeks evidence they are true. However, when a mysterious woman brings vague memories of the past but takes her father away, Bryanna finds what she thought were imaginary friends might be both real and dangerous.

Unlike some YA fantasy, this book does not transition straight from belief only in mundane life to acceptance of a magical quest; a series of plausible events conspire to prevent Bryanna from simply reporting her father’s disappearance to the Police, while drawing her deeper into the hidden world. Paired with accessible and fast-flowing prose, this slow build allows the more-grounded reader to maintain suspension of disbelief as her direct investment grows.

Bryanna is a well-rounded character, displaying a mix of intelligence and naiveté that feels right for someone of her age. Gerlach applies the same believable progression to her growth as she uses to draw the reader into the plot, making Bryanna exceptional enough that her victories over magical obstacles are realistic without damaging the reader’s ability to identify with her.

Kaylee, a girl who befriends Bryanna early in the story and with whom Bryanna spends most of her quest, is similarly introduced and developed as a real person, forced to grow more quickly by unusual challenges but still caught between child and adult.

Conversely, the majority of adult characters are quite static. However, as they are also mostly either not human or have lives vastly extended by magic, this serves to emphasise the impact of Bryanna’s actions rather than reduce their plausibility. In addition, each appearance reveals little quirks of character, adding depth to what start as archetypes.

Although the book can be read simply as a dramatic quest to rescue Bryanna’s father, it also raises deeper questions about the meaning of family and friendship which will resonate with any reader wondering about their place in the world.

I enjoyed this novel; however, I am far enough from the target market that I sympathised rather than empathised with the characters, so am unlikely to reread it for some time. I recommend it both to readers looking for a well-written YA story and fantasy lovers looking for a solid plot that does not need both hands and a glossary to enjoy.