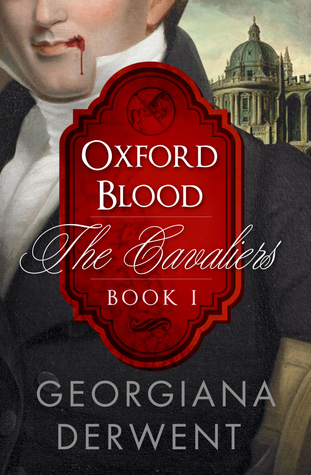 Although there are vampires and a love triangle, this novel is not a cookie cutter paranormal romance; none of these vampires is only waiting for the right woman to reveal a caring side beneath a pretence of gruffness, and the myriad other aspects of student life among vampires have equal weight with romance.

Since the Civil War Oxford University has been home to the Cavaliers; ostensibly another dining society; actually a vampiric conspiracy to recruit then advance the brightest and best of each generation by whatever means necessary. When Harriet French arrives to read History she finds herself courted by not one but two vampires. Horrified by their hungers but drawn to their power she struggles to balance humanity with ambition.

Derwent’s addition of vampires to Oxford life is skilfully done, leaving no seams. Her use of Harriet’s ignorance to reveal the truths of her vampires is similarly well handled, neither leaving the reader struggling to understand events nor resorting to crude expositions of knowledge already known to the characters. Having never been a clothes-horse I cannot comment on the intricacies of Harriet’s love of clothes; however, it was prominent enough to give readers who care real experience of her tastes without overwhelming others with long passages on clothes.

Harriet is a strong character: at times shallow and ambitious enough to work with the Cavaliers if it might advance her interests; yet also loyal to her mortal friends, and ready to act against the Cavaliers on some issues. This makes her increasing attraction to blood-drinking tyrants more believable than that of the usual heroines of vampire romance.

The Cavaliers are similarly strongly portrayed; despite clearly all being products of both privilege and vampirism, even minor Cavaliers have distinct personalities. The major characters are especially carefully nuanced, making the idea of a factionalised but stable predator society very plausible. This finesse continues even after the dénouement, with the last sentences of the book adding depth to one of the vampires.

However, Derwent’s creation of a blood-fueled version of high society might suffer from its own strength. Although there are supporting characters who are not part of, or do not support, the ruthless drive to be the most beautiful, the most successful, and the most powerful, self-interest and ambition are neither flaws nor defining characteristics in this novel. A reader who expects love to redeem, or inner character to win through, might find themselves disappointed.

I enjoyed this book greatly, finishing it in a single day. I recommend it to readers who enjoy new interpretations of the vampire myth, especially those seeking a counterpoint to the more usual humane vampire societies.

One thought on “Oxford Blood by Georgiana Derwent”