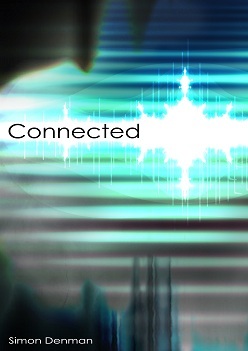 This stylish modern thriller interweaves quantum physics, theology, psychology, and computer science without losing either pace or the reader.

When his brother commits suicide, Peter volunteers to sort through his study; why does a musician have so many notes on religion and abstruse physics, and what did his last message that he knew everything mean? Across the country Doug’s best friend, and thesis partner, sends him a link to a file he must see but commits suicide almost immediately afterward; why did he erase all his work before he jumped? As these two men struggle to understand the last days of their loved ones, they are drawn into a race that could end in either humanity’s evolution or enslavement.

Denman includes plenty of details on the various fields that he draws upon while skilfully using point-of-view characters who are not specialists in the area, giving a sense that the plot has a solid base without either burying the lay reader under dry technical and philosophical discourse or skimping the interested amateur.

The characterisation varies between the two threads. Peter’s struggle with the death of his brother and the consequent impact on his marriage reads like a character-driven story, centred around a well-realised older man who is already burdened with the compromises and injuries of life. Conversely, Doug’s life, even before he is immersed in the plot, is a whirl of casual sex and rushing in where angels fear to tread, giving the feel of a more plot-centred narrative. Both threads are internally consistent, but they do not always sit perfectly next to each other, as if George Smiley and James Bond were investigating the same conspiracy.

A number of paragraphs are much longer than average for a thriller, some continuing for several average screens. However, these are balanced by much shorter paragraphs so would only be an issue for readers who dislike putting a book down, even briefly, in the middle of a paragraph.

Overall, as an interested amateur in both physics and metaphysics, I found the balance of theory and action most enjoyable. I recommend it to readers who like thrillers with a plausible explanation for a world-changing plot.

I received a free copy of this book.