Continuing my series of old reviews, I present The Burning City: 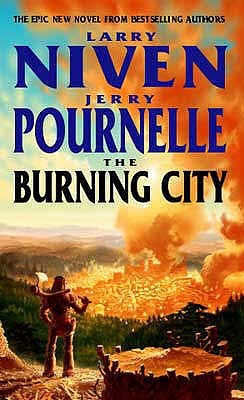 Niven and Pournelle have taken pre-Columbian evidence and legend and woven it into an enthralling fantasy.

The plot revolves around Whandall; a member of an ethnic grouping called Lordkin. Three groups live in the city of the title: the Lordkin, who are socially criminal; they exist by stealing what they need, and pass the days in family and gang politics; the kinless, who work hard and build, only to have their possessions ‘gathered’ by the Lordkin; finally, the Lords, who live in a walled enclave, with riches beyond a Lordkin’s dreams.

Every several years, the Lordkin are consumed by group madness, and commit mass acts of arson; this is seen as possession by their god.

The book is split into several sections detailing Whandall’s childhood in the city, his departure, his life outside the city, and his eventual return.

As with Feist’s Magician and others this is a tale of a boy from humble stock being caught up in the last years of a way of life, and being remade as a hero.

I described the book as enthralling, yet – unlike 999 – I have no strong memories of reading it and do not feel the same draw to seek it out. This certainly provides evidence for coffee2words’ theory that Reviews have a shelf life.

As with the other recovered reviews, I use a different approach from that I might use today, so it seems a little strange reading it back. However, those familiar with early drafts of my prose will recognise the use of semi-colons.