My wife took last week off as annual leave. We went to Edinburgh for a long weekend so, as she already mentioned, we were away from our computers for several days. I am usually at home writing so decided to take the entire week off from writing to make it more of a holiday for me too. Thus it is only now that you may learn of our epic journey! (If this seems melodramatic blame the pre-echoes of thinking Charles Dickens.)

We travelled by Easy Jet, so draconian luggage restrictions have saved you from a slide show of everything we saw. Instead I will share an impression.

The first thing that struck me was the odd road layout. After many years of attending courts across the country I have developed excellent urban navigation skills; however – despite a previous visit to Edinburgh – I had difficulty orienting myself for several days. With the insouciance of the long-term resident, a waiter told is it is quite easy as you just look for the castle then go from there; even if the castle were visible from everywhere, you need two points for a bearing. Comparing the triangles of streets folded around seven hills to the sweeping rectangles seen in architectural thrillers (Da Vinci Code, National Secret, et al.) I conclude that Edinburgh was built not by Masons but by an older chthonic sect as a gateway to cold Gods.

The folding of matter continues in the architecture. Surrounding the rigid lines of the castle are swathes of gothic buildings. Not just weekend gothic but PVC in July gothic. Fléchettes nest on every roofline. Much of the structure is millstone so it almost shimmers as the angle changes, solid yet changing. 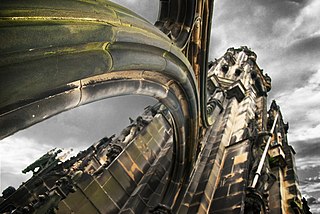 Thrusting from the focal point is the Scott Monument. Ascending the stairs reveals each buttress merges with smaller buttresses, each spire is formed of smaller spires, and a narrower stair awaits. Pressed from each side by stone you focus only on the journey. Reaching the next level the city surges back in ever-greater scale. Those who brave the final stair, tightly spiralling upward and no wider than shoulder width, see the city from a vantage barely wider than their feet. Echoing Scott’s skill in giving the reader a new perspective the stone fractals of his monument act as a model of the initiate’s journey to enlightenment. And like all the enlightened you must go down again.

In case this made you wonder if I lived on a diet of Iain Sinclair, I will finish with a suggestion for an excellent restaurant. McKirdy’s Steakhouse serves very good steak and haggis, and provides superb service; my wife did not know if she would like haggis so they brought us a free cake plate of haggis.